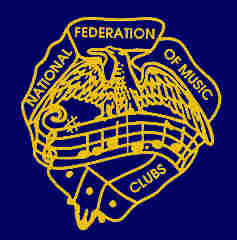 An Interpretation of the Insignia

“The encircling band of blue is the loyalty that
holds us together with the Federation.
It is tipped with gold that is enduring in our friendship and our music.
The eagle of supremacy, with outspread wings,
stands guard above us – supreme in the power of music and goodness.
Across all rests our symbol, interpreted,
we read – “My Country, Tis of Thee.”

It is with faith in friendship, country, and God
that we stand secure within the bonds
of our Federation through music.”

The National Federation of Music Clubs first pins, jeweled or enameled representations of the Federation Insignia, were designed by Mrs. John Leverett and officially adopted by the organization on April 19, 1899. The Federation’s fourteenth president, Mrs. Julia Fuqua Ober, of Norfolk, Virginia, interpreted the meaning of the design of the blue and gold emblem.

The president of the National Federation of Music Clubs wears the Federation pin of past national president, Mrs. Guy P. Gannett of Portland, Maine. This – her personal pin which she had made, was willed to the Federation to be worn by the incumbent president, who upon her retirement pins it on her successor.