It is with great sadness that we announce the death of Patricia Mills, who passed away on October 4, 2022, at the age of 92 years.

Pat was a longtime member of The Birmingham Musicale, and served as its President from 1983 – 1985.  She sang in the Club’s Choral Ensemble, the Madrigals, the Opera Ensemble, and the Musical Productions Ensemble.  She also designed – and often built – the sets for many productions.

Pat was talented artistically and verbally, and for 12 years she served on the MFMC Board of Directors as Editor of CounterPoint, the organization’s biennial magazine. Also, Pat was a longtime member – and served as President – of the Rochester Symphony Guild, raising funds to support the orchestra.  Her skills in calligraphy and in graphic design were greatly used in both these endeavors.

Pat and her husband (Delbert)  both were founding members of the prestigious Rochester Catholic Chorale.  Highlights of their time with that group included singing at St. Peter’s Basilica in Rome, and singing in the movie “The Rosary Murders”, filmed at Holy Redeemer Church in Detroit.

Pat and Del had five daughters, nine grandchildren and eight great-grandchildren, and Pat knitted afghans for all the family!  She leaves an incredible legacy of love, talent  and wisdom, and she will be greatly missed by all who knew her.

Dina Soresi Winter passed away Saturday, September 18, 2021 at her home in Grosse Pointe Shores at the age of 91. Her death was due to natural causes. Her mood as she passed away was one of peace, tranquility, and quiet contentment. She is survived by her husband, Eric, whom she married in 1970.

Dina was passionate about whatever she turned her hand to!

In her early teens she saw her first opera, La Traviata. She saw it looking out over the rail on a balcony way above the stage at the old New York Metropolitan Opera. She was mesmerized by the splendor of the scene, the costumes, the sets, the orchestra, and, most of all, the singers. She told her mom, ”I want to become an opera singer!” And become an opera singer she did, winning a big prize that enabled her to be coached in Europe, and going on to sing leading operatic roles there.

Her operatic claim to fame is to have sung the lead role in the first significant twentieth century production of Donizetti’s then almost forgotten opera, Mary Stuart, in 1958. Her success brought this opera to the attention of major opera producers, with the result that Mary Stuart is now a staple of opera theatres across the globe.

Dina’s next passion was Waldorf education, and she was a key member of the team that got the still-thriving Detroit Waldorf School off the ground in 1966. She tried always to be the person answering the phone, and, if there was even a glimmer of interest, Dina was off articulating the values of Waldorf education. “At what other school,” she would ask, “do the children weep when they are too sick to attend?”

Her primary interest later returned to music, and she became the Director of Opera Programs for the award-winning Detroit Concert Choir, where some of their most successful concerts were their opera programs.

Her final passion was Tuesday Musicale of Detroit, where she was asked to join the board and went on to become President. Tuesday Musicale puts on monthly programs and annually features an Artist of the Year and a Young Artist of the Year. With her unquestioned musical credentials, the organization’s substantial financial resources and a storied history going back to 1885, Dina was able to gather round her a board and musicians who together raised the Tuesday Musicale of Detroit to a new level. She also selected and inspired the leadership of Tuesday Musicale’s Student League, where highly talented teenagers meet once a month to perform for one another and receive advice on how to develop their art from some of the finest musicians in the area. Dina served one three-year term and one four-year term as President before resigning from this position in June.

Dina has now left us, and while she will be sadly missed by her husband and her many friends and admirers, she will be celebrated and revered for her many contributions to the life of Southeast Michigan. 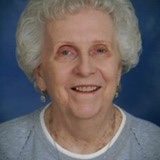 Mary Lou Lourim, Age 87, died peacefully at Vista Grande Villa, Jackson, MI, Friday, May 24, 2019. She was born October 15, 1931 in Mohawk, MI in the Upper Peninsula. She married Thomas W. Lourim on May 3, 1952 in Jackson, MI, who predeceased her in November, 2014. Mary Lou was an active member of First United Methodist Church where she sang in the church choir for over 40 years. She performed at both Carnegie Hall and the Lincoln Center with the choir. She was a 43 year member of Jackson Tuesday Musicale where she was an honorary past president, member of the chorus, and chair of the music awards committee. She was a past chaplain of the Michigan Federation of Music Clubs. She loved making music, including playing the organ for funerals and playing her piano at home and for school functions. She was a Teachers’ Aide for Jackson Public Schools at Bennett Elementary School for 9 years where the students loved her and often asked if they could come home with her. Her family was the most important thing to her and she rarely missed any events of her children or grandchildren. She was a fierce competitor at Phase 10 and any wins against her were hard fought battles. 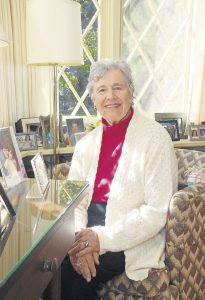 Priscilla Upton Byrns passed away peacefully in Minneapolis on Jan. 3, 2018, at age 88, surrounded by her family.

Born on Nov. 28, 1929, she was the daughter of Frederick S. and Margaret B. Upton of St. Joseph. Her father was a founder of what is now the Whirlpool Corp. After attending local schools, she graduated from Emma Willard School in Troy, N.Y. She later received a bachelor’s degree from Wheelock College in Boston.

In 1953, she married Chester J. Byrns of New York City. Chet was a successful attorney and later a long-serving circuit court judge in Berrien County. They were married for 48 years when he died in 2001.

Prill was blessed to have an exceptionally loving and close-knit family, which formed her character. Her entire life was spent in the Twin Cities, where she was active in a multitude of volunteer activities. Highlights of her service include the YWCA, St. Paul’s Episcopal Church, Southwest Michigan Symphony, Monday Musical Club, P.E.O., Daughters of the American Revolution, Girl Scouts, Heritage Center, Indian Hills Garden Club, Frederick S. Upton Foundation, First Congregational Church choir, Beach Bums and the Lincoln Senior Center, where she was an ace bridge player and until recently its president. She embodied and epitomized the tradition of over a century of community service by the Upton family.

She was both a pillar of her community and its modest servant. A true leader with the softest touch possible, she was able to get great things accomplished through the force of her substantial charm and authenticity. Her extensive volunteer efforts and work on behalf of the community were recognized by numerous leadership awards. Her steadfast dedication to the Heritage Center resulted in its new building being named the Priscilla U. Byrns Heritage Center in 1998.

An accomplished sportswoman, she was skilled in tennis, swimming and bowling, and was an avid follower of many sports teams, most especially the Chicago Cubs, Michigan Wolverines and Oklahoma City Thunder. Music was another passion, and she enjoyed decades as an enthusiastic singer, bell ringer, flutist and a lover of classical music.

Prill delighted in the natural world, spending many hours in her extensive gardens, snorkeling amidst tropical fish, and enjoying her many beloved dogs and cats. She did her best to avoid stepping on an ant.

But above all, her greatest love and devotion were to her family, which was the beneficiary of her nurturing spirit. She was the perfect complement to her intellectual and hard-driving husband, Chester. She taught her children the importance of love of family, concern for others, giving back to one’s community and being sure to enjoy the precious gift of life.

Prill was a strikingly beautiful woman her whole life – always natural – but nothing could eclipse her radiant, larger than life smile. Utterly without pretense, Prill’s warmth enabled her to win the affection of all she met. Optimism was a natural and animating part of her spirit. Her like will not be seen again, and she will be deeply missed by her family and legions of friends.

A public gathering will be 5-8 p.m. Friday, Jan. 12, at the Priscilla U. Byrns Heritage Center, 601 Main St., St. Joseph. The funeral will be at 2 p.m. Saturday, Jan. 13 at the First Congregational Church, 2001 Niles Ave., St. Joseph. A private burial will follow the service. Those wishing to leave a condolence online may do so at www.starks-menchinger.com. In lieu of flowers, memorial donations may be made to the Heritage Museum and Cultural Center, 601 Main St., St. Joseph, MI 49085, for online donations, www.theheritagemcc.org.

Stephanie was a lifelong supporter of the vocal performing arts. She sang soprano throughout her life as a member of many choruses and choirs including her high school glee club, Central United Methodist Church choir, and the Lansing Matinee Musicale. A tireless volunteer, she served in many capacities with both the Michigan (past president) and National Federation of Music Clubs, as well as Junior Festival chairperson for many years. She will be deeply missed.

The funeral service will be held at 11:00 a.m. on Friday, November 17, 2017, at Central United Methodist Church, 215 N. Capitol Ave., Lansing. Her family will receive friends from 2-4 and 6-8 p.m. on Thursday at the Estes-Leadley Greater Lansing Chapel and beginning at 10:00 a.m. on Friday at the church. Interment will take place at 11:00 a.m. on Saturday in Byron Cemetery, Byron, MI. Memorial contributions may be made to Lansing Matinee Musicale, Inc. or the Michigan Federation of Music Clubs. 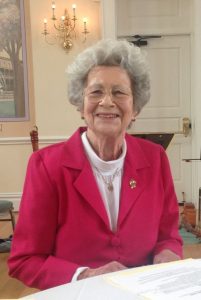 It is with great sadness that we announce the passing of our friend, Tenney Miller.

Tenney is a former Michigan Federation of Music Clubs President and Monday Musical Club President and served on the national, state, and local levels. However, her love and devotion was for the Junior Club, where she championed for education and scholarship. She loved attending Student and Junior Club performances and never failed to praise students.  Her enthusiasm was infectious! Her dedication to the annual National Music Week celebration was honored annually by the National Federation of Music Clubs. Her love for music was only shadowed by her faith and love for her family. She will be greatly missed.